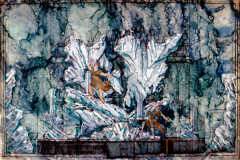 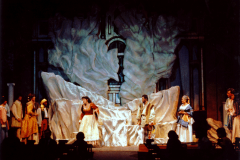 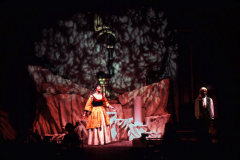 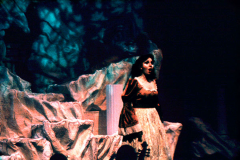 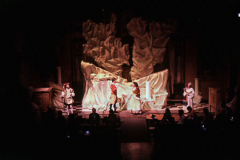 “La Galatea”,  a 17th-century Baroque opera by Loreto Vittori, was staged at Christ Church in Manhattan.  The set had to work within the confines of the choir, reredos screen,  and the pulpit.

Don Warshaw created an abstract environment of pieces of shattered Capo di Monte painted porcelain that would play against the gold carved reredos screen.  Using scenic gobos and abstract images all the locales could be portrayed.

Five locales from the deep sea to the heavens were conveyed on “stage.” The finished look was an elegant and sophisticated use of space and form to support and not overwhelm a musically delicate early opera.

In Opera Review, Bernard Holland said, “Don Warshaw’s design follows the conceit by recreating a sort of artificial 17th-century grotto, which rises against and covers Christ Church’s altar. It is a simple yet striking white set, which creates rocks using a technique resembling a papier-mâché technique.”

Opera News reported that “Don Warshaw’s basic set, a practicable free-form grotto of white papier-mâché that partially concealed yet did not jar with the prevailing Byzantine gilt of the altar, attractively suggested the travertine fantasy of, say, Bernini’s central fountain in the Piazza Navona.”